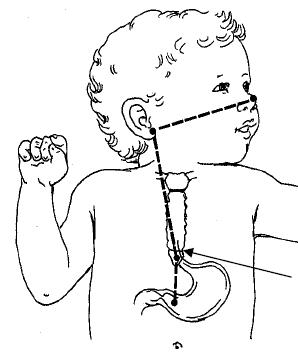 There are two basic methods I use to deliver "herbal" dosages to Jaymun
...NG Tube, and mixing herbs in his bottle.
In BOTH cases I use some special methods.

NG Tube:
Putting an NG tube in (through Jaymun's nose into his stomach) enables us to give exact and complete dosages anytime of the day or night, on an empty or full stomach. Although there is slight discomfort while pushing a few ounces of herbal teas through, it is the best way to succesfully deliver concentrated, food-medicine to his stomach with exact measurement and timing.

Children's Hospital usually places the NG tube for us
...although I've done it myself a few times.
I use their careful instructions for placing an NG tube.

"Tea, or Not to Tea":
For faster absorbtion I first open the herbal capsules and mix with liquid (water, aloe-vera, etc.).
I think this helps in several ways (dissolving in liquid - as opposed to capsules dissolving internally):
...herbs may enter the bloodstream faster
...the lining of the stomach may be more protected
...combinations gain greater synergy
...emulsification opportunities

Clearing/UnClogging Tube: Some Herbal mixtures dissolve - others settle or tend to thicken as they stand.
...Slippery Elm - which is intended to boost intestinal mucilage gets thick later
...The FeverFew supplement I use has twig parts which settle
...Curcumin has powder and irregular chunks.
If the contents of a capsule will not completely dissolve or at least remain suspended in solution
...then I follow the general rule of no more than two capsules per liquid ounce.
Even if it has been mixed thoroughly, and drawn into a 2 ounce (60cc) syringe
...I still shake it vigorously just before pushing it through Jaymun's NG tube.
Curcumin tends to settle and collect in the bottom of a syringe going into the tube as clumps
...I avoid this sometimes by more dilution and shaking while pushing through
...or doubling the liquid mixture by adding something thicker like yogurt or kefir that will suspend the particles.
Once I start pushing a dose through I do not slow or stop - just keep on till it's done.
I use a small thin syringe to push clear water through and flush or unclog the tube
...(for unclogging purposes a 60cc (two ounce) syringe does not have much leverage)
...I've many times thought his tube was clogged when all I needed was a quick hard push of water from a 5 cc syringe.
I ALWAYS have ready this small syringe with 5 cc of water so IMMEDIATELY upon completion of his herbal dose I can flush. That way particles cannot settle to a clump in the tube and make a tough situation impossible.

With Milk (in Bottle):
One of my goals has been to find a way to deliver medicines to Jaymun without needing an NG tube in. Although normally we would have weaned him from a bottle by now, we have kept it because his emotional attachment to the experience allows me to piggyback odd tasting things with the milk. I'm not sure as to the reactions of herbs with milk, but he tends to overlook the "additives" and drink it out of habit as he falls asleep. I have gradually added more and more components until I can get away with handing him a bottle that is almost green. He'll shake it and look at it for a few seconds, but then drink it and drift off to sleep.

This method is simpler than an NG ...but still does require a bit of standardization. My method is to put an ounce and a half of water in his bottle and then empty the supplement capsules into the water. I shake till they are all quite dissolved ...then add 2.5 oz of milk, shake, and give to Jaymun. Not as precise as the NG tube ...but satisfactory for a milder or follow-up regimen.

NG Tube and Neutropenia:
Last July when Jaymun was recovering from chemo and neutropenic (no ANC to fight infections) the hospital staff was extremely nervous about inserting an NG tube for feeding. The risk for infection was great because his immune system was already compromised. I had to shoulder the responsiblity for that decision ..and since the results were successfull (the supplemental medicines we used helped fight existing conditions - see post July 2008 about gastro-intestinal infections)
...I now understand that it is almost impossible for traditional medical staff to make a proper decision about the risks/benefits if an NG tube is the only way to effectivly deliver herbal medicine. If they are not trained in alternative medicines they are forced to err on the side of "do no harm" (post Sep 2008).

So I believe I made the right decision. However, I know another dad who merely squirted the mixtures into his son's mouth during a similar period. So I'm not sure how I would advise another person in this situation. I will say that Jaymun was so close to death that we felt horrible even bothering him to do the NG doses. I'm not sure if we could have stood the mental anguish of making him choke down medicine when the palliative care team was advising a morphine lubricated pathway towards what everyone thought would be inevitable death.

In that case the NG tube helped me go about my silent work of dribbling in tiny mixtures (10 cc's at a time)
gradually coaxing his body back ...even though he was practically comatose.