Jaymun had a miserable weekend. His head seemed to hurt him more
...by this morning all he wanted to do was lay around.
We've been doing exclusively alternative treatment for the past 20 days (except Dilantin), and even though we've had some success (today back to zero blasts in circulating blood), it seems this (rapid CNS tumor escalation?) is nothing to fool around with. So we came down to clinic tonight and after discussion were admitted for the purpose of resuming IT chemo and some form of systemic chemo. Obviously his neurological symptoms (tumor?) were becoming an emergency.

So oncology presented a plan that included intravenous Cytarabine/Clofarabine chemo, and intrathecal Methotrexate/Cytarabine/Clofarabine, followed by Total-Body Irradiation, and after recovery another round of chemo (intense conditioning) followed by another bone-marrow transplant. I forgot to ask what his survival percentage would be calculated at (if they even have one with AML that has relapsed this many times).

Jaymun had an initial Head CT and we started the admission process. We got up to our room, and I was checking information whether clofarabine was the proper choice does Jaymun's cytometry express cd 3,5,7? Are those the only ones listed for clofarabine? An outside oncologist had raised that question, and suggested Mylotarg combined with DLI's from previous donor brother Devon (perfect 10/10 match). Then we could use supplements and pre-activate Devon's immune system. But before I could get an answer, Dr. Kelly came back with new sobering information. It appears tonight's Head CT showed that Jaymun's increasing symptoms were not so much from the progressing leukemia, but from new bleeding in his brain :(
If you look at Jaymun's labs this past week you will see that on Sunday there was a sudden drop in platelets. His platelets had been rising since last Wed., but we had a 36 hour disruption in his herbal doses that started with him being NPO last Thursday evening to prepare for an MRI Friday morning. He missed out on anti-inflamatory and anti-proliferative herbs, and I thought since platelet levels correspond to tumor burden (see email below) possibly the tumor responded to exponential stimulation rather than appropriate inhibition, and platelets resumed falling on Sunday? 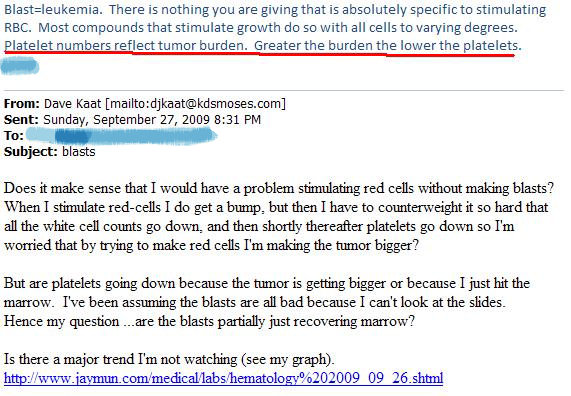 But that (the brain bleed) brought oncology to a screeching halt
...and we were shipped off to intensive care where Jaymun was sedated and put on dexamethasone (a steroid) to reduce edema. My mind was still reeling, about half-way into the process I realized that dexamethasone will inactivate Jaymun's immune system for weeks.
I don't know if that automatically eliminates the Mylotarg option or not, but it sure worries me about the course of this treatment. Last year (2008) there were complications that resulted in the complete halt of traditional treatment, I was able to pick up the ball and run with alternative treatments to get him into remission. But if this drags on, and they keep using "Dex", his blast count may climb and we will have reduced options left in an emergency. I wonder if we would be forced to take other drastic interventions (localized radiation?).

And on the flip side, now that I know the escalation (of clinical symptoms) this weekend was bleed related (not tumor related) and primarily triggered by low platelets, that shifts my priorities back towards the plants, I question whether systemic chemo will have a better chance of killing his blasts (without killing him)? But since they started Dex so fast, that makes it much harder to shift back to the natural side. Talk about getting locked into a course of action. Clofarabine here we come :(
PS - later note: If I had understood brain bleeds and DIC at the time, then maybe I would have figured out that the platelet drop on Saturday evening/Sunday was probably caused by the (Saturday afternoon?) bleed rather than the other way around. Maybe more educated people than me considered that during admission and that is why the quick Head CT?

But once I looked at the Head CT myself, that gave me some perspective. That bleed looks nasty, and we want to do everything possible to clear this up and if they decided "dex" is the only real option for reducing edema, then "dex" it is.

The team here at Children's wants a complete halt of alternative treatments.
I can't say I feel good right now about that, but we need platelets, FFP, clotting factors, etc.
(and we have to be here to get them)