Going down for labs this (Monday) morning.

Jaymun is doing very well, he had a great weekend. He spent quite a bit of time with something very fun but I can't talk about it because that will steal Jennifer's thunder (she's the one with the pictures and the story :)


...Ok, Jaymun's ANC was in the 600's (nice jump from the 300's it had leveled off to.) We had started up supplements last week again, and this weekend we switched to some "red-blood cell stimulating" herbs. So it was cool to also see almost an instant bump in his reticulocyte (baby red cell) count. It had been hovering at .2 or .3 and it jumped to .8!

So I guess we are going to stay the herbal course since it seems to have contributed to the trend below.
(results from when the machines spin down his CSF fluid).
Remember, 7/18 was the last time Jaymun received any CSF chemo. Since then only herbal therapy. 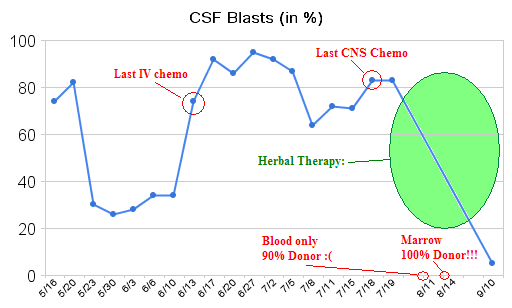 When you look at the graph above, remember that Jaymun has been neutropenic (aplastic marrow) since June. His marrow has slowly begun to recover although still very dilute. Possibly the "GVL" (graft versus leukemia) effect from his 2006 BMT could have kicked in (8/13?). However, during the prior "post chemo" recovery in May the GVL effect did NOT kick in (his marrow came back with blasts). And since 60 days after chemo in August his blood was only 90% donor, one could argue that this recovery was headed in that same direction. Also, the GVL effect would not account for his CNS numbers defying predictions. So I think evidence would point to the herbal remedies being responsible for the immune system kicking the cancer out of his marrow "GVL" effect. At the very least the herbal remedies are triggering the GVL effect AND transporting it to the CNS ( cytokines, activated T-cells, etc. from things like ganoderma lucidum, etc.)

Jennifer and I are discussing now whether or not to put a port (ommaya) in his head so we can regularly check CSF fluid over the next six months (without doing spinal taps). That way we can adjust herbal supplements accordingly.
I want to make sure we do not relax treatment too soon, miscalibrate (fall short), or miss the beginnings of relapse when we may be able to completely eliminate further toxic treatments, or at least prolong remission while science advances.

Continual spinal taps pose too much of a cumulative risk for subdural hygroma(s)
(the sort of which Jaymun already experienced on 7/18).