Today was one of those frustrating days.

"Good" news first. Jaymun's count went back down to 340 (see labs on medical tab) from 530. But we expected that because we had stopped supplements the past few days. This is the second time his counts immediately dip when we stop supplements - so at least that confirms that what we are giving him is significantly boosting his NK cells, and so by next Monday they should jump up again.

So I guess that is good news. No need for expensive G-CSF when herbs and mushrooms can do the trick.

This is the second time that natural remedies have done what doctors said would not happen. First back in July they said his digestive system would not recover and that he would die. You all prayed with us then, we put him on hourly doses of aloe-vera, chorophyll, slippery-elm, and other herbal remedies, and within five days he was eating and moving his bowels regularly.

Then they said although his marrow aplasia would result in long-term transfusion dependance his CNS leukemia would take him sooner anyway. We took Jaymun home without any cell boost, and even though we discontinued using G-CSF, we still have been able to find natural remedies that directly and strongly boost his cell growth. Twice already we demonstrated that when discontinuing supplements his ANC immediately drops significantly (Aug 27 to 90, Sep 4 to 340).

It is exciting to see his counts rise. However... We have been eagerly awaiting the spinal tap scheduled for this morning. Here's why. In May, Jaymun relapsed in his CNS (Central Nervous System). The symptoms were horrible. Vomiting, severe pain, fevers... all the symptoms of leukemic menengitis. And since your CNS (brain/spinal area) is kept separate from your blood by the blood/brain barrier it is one of the most difficult areas to treat. Despite months of intrathecal chemo his CNS leukemia proved chemo-resistant. At last count from his subdural drain on 7/19/2008 he still had 1 nucleated cell and 83% blasts. There were no chemo treatments on or since that day. Because of the resistant nature of his chemo the doctors have fully expected intense neurological symptoms by this time (45 days later)..

There are none. He is a normally active two-year old. Growing like a weed, running around, very vocal, climbing, coloring, throwing tantrums (grin), etc. And his Head CT's show no chloromas, no meningeal enhancement, no signs of CNS leukemia. Today Dr. Talano said that it is clinically obvious that the supplements we are giving Jaymun are suppressing his CNS leukemia. 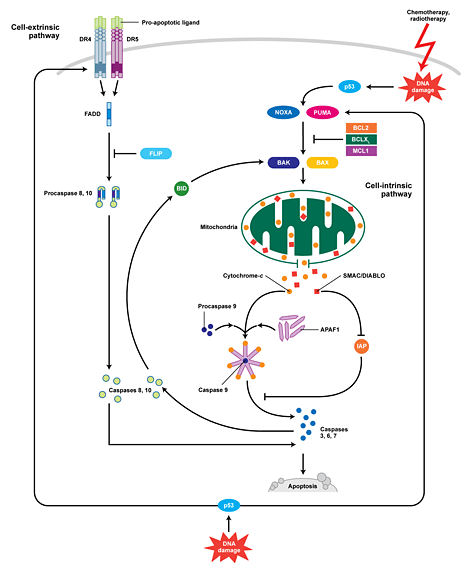 We already had figured as much, especially since we were rotating blood building herbs along with supplements targeted toward "restoring apoptosis defects".

Research in the past years shows apoptosis (the built in "kill switch" mechanism for cancer cells) to be a complex schematic of "capacitors", "resistors", "relays", and "circuit breakers" (I love analogies). And what is best of all, various natural molecules are the safest and most powerful methods to temporarily offset/reset the defective components, and allow the cancer cells to either shut themselves down, or be shut down by the immune system. Especially when you couple these "temporary repairs" with boosted immune factors and other nutritional or cellular stressors.

Fix the "Kill Switch" and cancer will turn itself off.

Here is the difficulty. We are undoubtedly not the first parents to be full of hope for natural cures. I am sure the doctors and nurses are accustomed to parents grasping at straws, or interpreting temporary recovery as permanent cure.
You see your child so full of life and it is easy to convince yourself your beloved one is not on "death row". Many parents want to merely forgo tests, and "hope for the best".


For my part, I am still intensely involved in researching and designing regimens for Jaymun. The month of August is done, I need a plan for September. I need to know #1 if what we did so far worked, and #2 exactly how much it worked. It seems his marrow is coming back in remission - too early to tell for sure, but so far so good. However, the marrow success could be the temporary effect of the last chemo round. That is why the CNS numbers are so important. Not only was he definately not in CNS remission after chemo was completed (July 19 subdural fluid sample), but since CNS leukemia is so extremely challenging and CSF numbers are relativly easy to measure - success there would tell us alot about the supplements.

We already know clinically that the supplements are helping. If we do a spinal tap now to peek into the CSF fluid then:
A) If we can't see cancer there now, then we will know that our supplements were successful - and can repeat them occasionally (one week per month?) for maintenance, and increase intensity if the cancer returns.
B) If we do see cancer we can immediately increase intensity of supplements, check in a few weeks for success, and then otherwise strongly consider radiation.

On the other hand, if we don't do a spinal tap now, how will we ever know what to do if Jaymun starts showing neurological symptoms in, say, two months? Quite possibly we might have been able to avoid that, or avoid radiation at that time, or at the very least prolong that period of time by months with proper supplement dosage now. I realize the doctors can not put much stock in the supplements - from their viewpoint it's either "radiation" or "eventual death" (and actually they don't even believe radiation will give a permanent cure). I don't blame them for their skepticism - they are bound to standard treatment while we are venturing into the realm of research.


But... back to today's story. We were eagerly awaiting today's spinal tap to help us either relax or redouble efforts. On Tuesday Dr. Talano scheduled today's tap with a Head CT first (to make sure his subdural hygromas were still improving). So this morning we couldn't feed Jaymun anything (they call that NPO). He was very unhappy about not getting a bottle but we managed to get him all the way through the Head CT and into the BMT clinic where we proceeded to wait a full hour for the spinal tap. Which never happened. Dr. Talano came in to announce that the neuro-surgeon (Dr. Lew) had warned against the brain risks of a spinal tap after looking at Jaymun's Head CT. I was already aware of the risks but wondered why we weren't doing the spinal tap since today's head CT looked better?

At that point Dr. Talano proposed that we just skip the test because it would have "little impact" since Jaymun was clinically improving anyway - and the only real discussion was whether or not to do radiation (in the absence of which Jaymun's leukemia would never be cured).

She also admitted that as of our conversation at 11:00 this morning Dr. Lew had not even seen today's Head CT yet - but that she was repeating a conversation with him from Tuesday. At which point I saw red. What was then the purpose of today's Head CT??? We had just tortured a little boy with no food for four hours to come down and do a Head CT they had planned to ignore because obviously the doctor(s) had already made a prior decision that the spinal tap was an unneccesary risk.

After all, the only thing it would prove was whether prayer, four weeks, and $250 dollars worth of herbal supplements completed the job that two Years, and millions of dollars of chemo couldn't quite finish: achieve CNS remission for refractory, relapsed, congenital acute myeloid leukemia.

In some eyes, I might just be a sad figure of a deluded father clinging to false hopes just like hundreds of other parents have done. Dr. Margolis told me a month or two ago that Jaymun was "done" and that it would be better for me to relax, and spend time hugging my son instead of studying until 3:00 AM night after night. Well, the hard work paid off. We've had an extra month to hug Jaymun. Now I need to know if I have to go back to work again to help Jaymun enjoy many more months with us.

What I would really like is the help of a lab who could give me regular measurements of things like cytokines, circulating matrix metalloproteinase levels, blood factors, etc. In the absence of that, all I wanted was to know what the status of his CSF fluid was so I could know whether or not I am a fool, or headed in the right direction. The longer we wait, the more time expires for other trends to develop, and then we will only see one large trend instead of proper interpretation.

Dr. Talano said today - "why do the test? obviously what you are doing is working, so why not just keep giving the supplements?" So my question is... For how long? And how would I know how long? He needs an NG the way I give them. I can't wake a two year old up in the middle of the night to choke down six ounces of bitter tea. I need to make sure he gets exact dosages at exact times to insure bioavailability. Do I keep a NG tube stuck in Jaymun's nose for the next six months? Twelve months? The doctors more than anyone should know we are playing with fire. If what I am doing is working, then the contrary also would seem to be true. If I put just a tad too little water on a smouldering fire, the cancer would come roaring back.

Based on the spinal tap we hoped to have today, by tonight I had hoped to celebrate some more, or increase, decrease, or redirect efforts. Instead I have to figure out why we were scheduled to come in today for a Head CT that was an inconsequential diversion, and then were lobbied to ignore tests and rely on radiation as the sole eventual remedy for inevitable relapse and death.

Does that mean they are just humoring me, and the supplements are useless?