A Cup of Fresh Water

Ok... Take a deep breath.
We met with the doctors this morning, Jennifer and I did. Unless things change, we have decided
not to do another transplant. The risk is just too much for his body. It would take a miracle just for him to survive the transplant. And statistically the cancer would almost certainly relapse again anyway, at which point we wouldn't have gained anything, only be fighting the same cancer battle with a much more immature immune system (because of the slower transplant recovery).

So that leaves us with his CNS not in remission (nucleated cell count 4 yesterday), and marrow still unrecovered (aplastic / hypocellular). We could do CNS radiation to get him into CNS remission, but if his marrow comes back with blasts, that will take him away faster than his CNS ...we might as well wait to see if we need to fight that battle first.

He still is one sick little boy from the last chemo round (30 days ago). He doesn't eat - we have to feed him through an "NG" tube. He is always worn out, doesn't like to move fast, walks slowly and unsteadily (if at all), hooked up to IV lines most of the day, runs high fevers (103+) at least once per day, etc. His marrow took a huge hit from the chemo and it may still be several more weeks before it recovers. At that point even if he is in remission, without a transplant they do not expect that remission to last long.

A second transplant was the only standard therapy to offer - so at this point we are looking into experimental treatments. CHW is not a "phase 1" facility, so Dr.'s Kelly and Talano are going to assemble some options from other hospitals for us.
We are fully aware that these options may offer even less scientific promise (more theoretical promise), but even if they fail, at least Jaymun will not have spent the last months of his life being beat up by a second transplant.


We appreciate all the offers for assistance. Once we review Jaymun's options, there may yet be a time when we will need to push hard for a certain result, go to a different country, obtain a certain drug, etc. Right now we need to let the expert doctors here at CHW lead the way - this is what they are good at, they have hearts of gold. I can not imagine doing what they do day in / day out. It would consume me. Right now I wish so dearly that I had gone to med school. I wish I had at my disposal the information they have stored in their brains. Every day my questions double. I feel many times so helpless, theories jumping in to fill the gaps of my ignorance ...that are resolved the next day by simple answers that any novice med student knows.

I know that seeing Jaymun helpless in his battle against cancer makes you all want to do something, anything.
If you could leverage your money, time, connections you would all gladly help rescue him
...and I thank you for that.

I had just exited the meeting about Jaymun, when I received a call from a friend I had not talked to for months. He was unaware of Jaymun's plight, because he and his father had just returned from visiting the people in Kotthapalli, Khammam District, State of Andhra Pradesh, India. After hearing about Jaymun, he did not want to talk about their own challenges, but I insisted and he told me some stories that added a bit of perspective. Stories about mothers who worry about "simpler" things than cancer - things like diarrhea, and dysentery. Like many other mothers across India and Africa they do not spend their time driving in air-conditioned vans, the mothers of Kotthapalli walk 4.4 kilometers (round trip) three times a day to get unclean water from an open well (floating with waste elements, runoff, garbage, etc.). Once this "well" is dry, they have to walk even further to draw from an "agricultural well" that is even more contaminated. Kotthapalli is desperate for fresh water.

Here at the hospital our hearts lurch when Jaymun's pulsox alarms, because his little heart is hammering away as infections attack his body.
There in Kotthapalli a mother's heart trembles when her child gets a "simple" tummy-ache, because she remembers the little ones who vomited blood for days and died from dysentery.
If Jaymun goes into crisis I post a blog entry and within minutes hundreds of people are praying for him.
If her child vomits blood there is no blog or thousands of people praying when the fevers go up. She paces the floor praying just as hard, feeling just as desperate and confused. She leaves home to walk 4 kilometers to get water, hoping he will still be alive when she returns.
There is no nursing station with automated alarms and teams of people that will rush to his side.
There are only siblings to hold his hand while he waits for his mother to come back...

When Jaymun's temperature spikes we go to the kitchen for cold, pure water.
When the children of Kotthapalli are feverish, mom pours contaminated water into a pot to boil, then waits for a lukewarm drink of water.

After my conversation with Troy I thought about what he told me.
About not just the people in Kotthapalli, but the other villages Troy and his father are pouring their life out to help.

And I realized something. If I needed (and I don't) to raise hundreds of thousands of dollars to get Jaymun some special treatment I am sure you all would stand beside me to rescue my son. We have all seen pleas from other desparate parents with children suffering from leukemia. We would consider it an honor to help Jaymun. We would watch him grow up and consider it money well spent.

But we are very blessed. I am convinced that God already has the people and the resources in place to rescue Jaymun. Even though we don't see the way clear yet, I trust Him to bring us through.

He is Lord.
We need to redouble our efforts to pray for Jaymun.
God has the final say in things like this.
Period.

Now, if we are requesting God to work for Jaymun, how do we respond when He wants us to do His work of mercy in places like Kotthapalli? It doesn't require millions of dollars of research to do something about their problems.
All we have to do is drill a fresh-water well in their village.
And then we will have helped hundreds of mothers at the same time. Mothers who will spend more time with their children. Children who will not suffer and die from the 80% of diseases that are water-borne.

I called my friend Troy back and asked him for the pictures linked to this story.
He confirmed it averages only a thousand U.S. dollars to drill a fresh-water well where they are currently working.


Friends, these are children with needs, and we have the clear ability to help them right now. 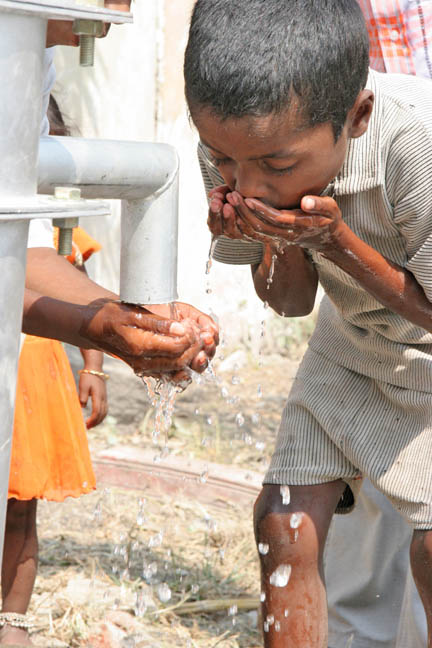 When Troy drills a well, he engraves a dedication message on it.
That could be your name - your gift to the village.

Or you could do it in Jaymun's name. Let us make Jaymun's struggle worth while.
Let's have villagers all over India and Africa drinking water from wells with the inscription:

"A cup of fresh water... From Jaymun, with love"


We can help with this project and pass along your donations.